Wine – the pretentiousness of getting drunk 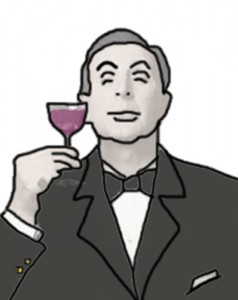 This is one of those things that pretentious pricks, alcoholic housewives, and closeted drunks will always love. In the world of alcohol, wine stands alone at the top in the corners of peoples’ minds.

It was the drink of the Gods in Greek and Roman mythology – they even had a god devoted solely to wine (Dionysus and Bacchus respectively). For the Christians, it was their Lord’s god damn blood encouraging devotees for the next 2000 years to drink it which is just a little perverted to me. No other drink is associated with such an aura of sophistication and cultural significance. The other alcoholic drinks don’t even come close – beer is the common man’s drink, hard alcohol is for old men, writers and drunks, champagne for gays and celebrations, malt liquor for blacks, and mixed drinks and wine coolers for women and gays.

Wine also falls into the general category that St. Patrick’s day, Cinco da Mayo, ones birthday, New Year’s Eve, Halloween, July 4th, and any sports’ event belong – they are all socially acceptable times to drink. Though wine isn’t a holiday or event it falls in this category because of its so-called sophistication. Somehow getting slammed on 2 bottles of wine versus a 12 pack of beer is sophisticated. Wine allows complete idiotic bored housewives and their husbands to seem worldly and sophisticated at their dinner parties. It also allows the shoestring budget college student to appear classier than he is when drinking a $3 bottle with a date.

For me, drinking wine takes too much effort. I’d have to learn where the wine is from and what year it was made. Was the year a good one for that region? I’d have to hold out the bottle admiringly like admiring a fine work of art and drink small amounts at a time out of a ridiculously shaped glass that for whatever reason is always made as thinly as possible. After all that I’d have to swirl it around in the glass to “aerate” it, “bringing out the flavor” which to date I’ve never seemed to be able to bring out since it always just tastes like the same wine to me. After the swirling the wine, the wine drinker’s true pretentiousness comes out. They lift the glass up to their noses and smell it describing it in some bullshit terms like nutty or fruity – much like themselves. By the time they look up to see if you agree with their pretentiously meaningless descriptions, I’ve already downed my wine and am standing there waiting for them to pour me my second glass just to be able to stand being in the same room as them.

I’ll admit that I sometimes get wrapped up in the romantic aura that surrounds wine. I definitely like the idea of winery tours. Granted they’d be a thousand times better if they served beer instead but still the idea is nice.  Going to wineries nestled out in the beautiful countryside, going from one place to the next drinking, enjoying well “paired” snacks, and the company of people you enjoy. Hell, every year or so, when I’m at the grocery store I get a couple of different types of wine to try to get into it but never have.

The main problem though is the taste. I don’t like wine. Granted I might not like it because of a couple of bad experiences where I ended up with foul smelling chunks of it all over me mixed with the spaghetti I had earlier that evening as I quickly retreat to the bathroom.

More than anything, it’s a lot of pressure to like wine. I’d have to study the dozens of types of wine so that I can pretend to know the difference in taste between them and whether they smell woody, pungent, or spicy even though I just smell wine. I’d have to study up on the different wine growing regions and what type of acidity their soils have and what their good years were. I’d have to start buying tickets to culturally approved public events so that I can talk about how wonderful these boring as hell things are to show my sophistication. I also couldn’t zone out anymore listening to the absurd winery sales peoples’ descriptions of a wine when all I’m trying to do is get a free sample that I’m sure as hell not gonna spit out.

Perhaps even more than disliking the taste, I really could never cope with the idea that I’ve become one of those pretentious assholes. Beer really is the only alcohol that I need.