Purell – the overuse of hand sanitizers 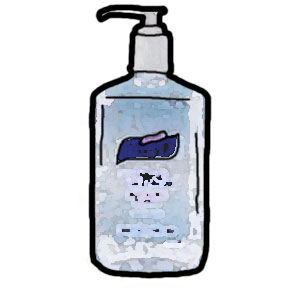 I’m so tired of our paranoid “Purell” society. What ever happened to rugged American individualism? We fear everything now including things that just 50 years ago people didn’t even think about.

Purell is the epitome of what American society has gradually been becoming. A bunch of pussies manipulated into believing that everything and everyone is out to get us so that other peoples’ agendas get accomplished.

Before Purell, washing your hands was considered sufficient.  But then Purell comes out and everyone now believes they have to use it or they might get sick.  Many are now at the point where they carry it around and use it after touching anything outside of their homes for fear of germs. Grocery stores now even have wet anti-bacterial wipes so people can wipe off the cart handles.  I mean what the hell?!  The irony is that our bodies have billions of microbes living on and inside of us, and without these microbes, we’d die.

Purell is a hand sanitizer whose active ingredient is ethanol and claims that 99.9% of common germs, both good and bad, are killed within 15 seconds of its use.  That’s fine and all but maybe it’s good to come in contact with foreign germs sometimes. We evolved to be exposed to germs and even germs that can harm us which we inevitably will be exposed. Exposure to germs on a regular basis helps to increase our immunity. Living in a bubble will only make it so that when you step out on occasion you’re more prone to become sick.

One prime example of Western culture’s pussification was when I was traveling through India.  You come across all types of travelers most of which want an adventure or at least to see something new.  A good portion of them were adventurous, eating whatever they could get their hands on despite the good possibility that the cook might have wiped his ass with his left hand before preparing the food.  Some, including myself on occasion, would even drink water straight from the tap.

The ones that made me ashamed of being a Westerner were the ones who packed bottles of Purell.  These were also the travelers who would often get sick and complain about travel conditions.  I mean you fucking traveled to India and you’re afraid of germs and complaining that things aren’t up to your own standards?  Maybe they should have done their research before hand and just stayed home instead of embarrassing the countries that they’re from by insulting the local populations.

Just one of India’s many fascinations is just how raw it is.   There’s animals everywhere, people pissing everywhere, burning trash, whole streets pitch black from the lack of electricity among a whole host of other things.  Yes, in an environment like this there are plenty of germs, but it has to be experienced at its most base level to fully appreciate and learn from it.  Travel is a beautiful thing.  It’s a time to be on guard but also to let go of your preconceptions and comfort zones.  The people who pack Purell will never fully appreciate what it means to travel and more generally understand being human.

I know it may seem like a small thing.  I mean what’s wrong with the use of Purell?  In and of itself it’s pretty innocuous.  The main thing about it that really bothers me is that it is irrational fear that is driving people to use it. Throughout history irrational fear of other countries, peoples, religions, etc. have been the cause of so many bad things.  Many if not most of these irrational fears have been propagated by certain high level people who are intelligent, well connected, and who want to further their own self centered agendas.  Whether it’s the leader who builds a case to their people against another country in order to go to war, or the CEO of a company trying to make people fear germs to get people to buy their product, it’s the existence of irrational fear that bothers me.

Irrational fear is irrational because it amplifies small dangers to ridiculous levels – like “All germs will get you sick” and “Islam is out to destroy the US and Christianity”. How protected can any person ever be and at what cost? Tomorrow, if the TSA was disbanded and everyone stopped using Purell, people would probably be just as safe as the world continues on unchanged.