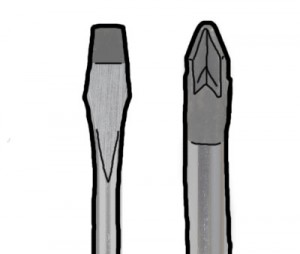 Ever need to screw or unscrew something (not that chubby girl you met at last call last night) and when you look for a screwdriver all that you can find is the wrong type? With all of the choices and decisions a person has to make why do they have to go and complicate things by having more than one type of screwdriver – namely, Phillip’s head and Flathead screwdrivers?

So first, a little history. Screws of the fastening variety have been around since the 1500’s. The first flat-bladed bit was fashioned in 1744 with the first handheld screwdriver being invented in the 1800’s. Eventually more and more types of screw heads were created to fulfill different needs such as being able to handle greater amounts of torque while fastening and unfastening screws. The Phillip’s head was one of these varieties that was invented by Henry Phillips in the 1930’s. At this time the automobile industry was using the assembly line and needed screws that could handle large amounts of torque to make tighter fastenings.

Being able to handle varying degrees of torque is probably the main reason for different shaped heads. Different applications are better served by certain head types. Flatheads offer a very basic head type that can be fastened or unfastened by anything that’s the right size and has a narrow flat surface such as a dime. Some people also prefer them aesthetically too when the screw is going to be exposed. Phillips’ head screws on the other hand are auto-centering and do not slip off of the screwdriver. They are also designed to cam-out which causes the screwdriver to slip out once a certain amount of torque has been exceeded.

Because there are so many different applications that screws are used in there can’t really be a standard screw head type. Some screws are even made so that there isn’t wide compatibility such as in certain electronic devices where the manufacturer doesn’t want people to make modifications. So even though sometimes not having the right screwdriver can be a little inconvenient, there is a reason for it.