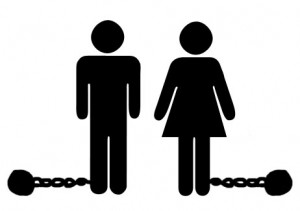 Marriage made more sense up until around 200 years ago when it started to be used for something it never was intended.  Before 200 years ago marriage was most often arranged by family members. It was used for procreation and as a sort of economic partnership.  Love wasn’t entangled with the marriage at this point.  Signing a legal contract made sense at this time.

Since marriage was nothing more than a contract, divorce prior to the rise of the Catholic Church in medieval Europe was relatively easy.   However, as the church became more involved in governing matters both politically and in peoples’ personal lives, the phrase “till death do us part” was added and made divorce illegal.  Protestantism later would bring some sanity back (never thought I’d say a phrase like that) and make divorce legal again.

The problems that I have with marriage began around the 1800’s. This period was the age of romanticism and the idea of romantic love started to bloom. As a result of this new era’s ideals marriage’s original purpose began to become muddled with love.  Instead of marriage being arranged by others for procreative and economic advantages, love between a man and woman slowly started to become the primary basis.

Now, there is absolutely nothing that I don’t understand about this paradigm change.  Nothing at all especially with my modern point of view.  To have another person to share your life with providing both physiological and emotional well being makes perfect sense.

The thing that makes no sense though is that despite the majority of marriages now supposedly being completely based around love or at least temporary infatuation (with many notable exceptions), an economic legal contract is still being signed to ensure the continued pairing of the couple.  Now, I may not be the most romantic person in the world, but this strikes me as business like, cold, and completely contrary to the true meaning of romantic love.  At least prior to the 1800’s, there was little illusion of marriage’s purpose. In the US today, love is at the very heart of what most people believe marriage to be about. Much more further removed are marriage’s historical, legal, and economic aspects which are the real heart of marriage today.

If two people love each other, there are very little reasons why a contract needs to be signed to make sure the couple stays together. For christsakes, you aren’t partnering with a business, becoming an employee of a company, an employer contracting an employee, or buying a house. If the couple falls out of love, instead of a time and money consuming divorce, all they have to do is wave goodbye and walk away.  Obviously, adding children into the equation would complicate matters as the little rug rats have the tendency to do.  But even here, outside of a marriage contract, genetically both parents would be entitled to access to the children.

But such views would be looked at with confusion and scorn by most.  They have grown up in a world where people fall in love and get married.  That’s how they see things.  Countless movies, TV shows, songs, books, and our “great” Christian ideals reinforce to us that this is the way things are.  They aren’t able to step outside of this existing paradigm to ask “why?” and to see if any other way makes more sense.

Whether they admit to it or not, people who are most likely to favor marriage are the ones who benefit from it because their earning potential is low and marriage offers a means of obtaining a better life for them.  Though there are some who consciously think about the benefits for them that marriage offers (think Anna Nicole Smith), many others at a subconscious level are undoubtedly influenced by this fact.  I, myself, would be more than happy to marry a beautiful, kind, smart, and umm… rich woman.  Hell, she could be ugly, mean, stupid and 30 years older than me.  The downsides to such an arrangement for me would be relatively minimal – just ask Kevin Federline (Britney Spears’ ex-husband) or peg legged Heather Mills (Paul McCartney’s ex-wife).  Ask either one of these no talent individuals, and I’m sure they had no problem with their marriage arrangements as they took all that they could in their divorce settlements.

Now, obviously there are some arguments in favor of marriage.  Marriage affords couples with tax and other economic benefits.  It also guarantees money, in the case of a one income household, to the non-working individual in case of a divorce and allows for a more legally binding arrangement especially in the case of children.  It also affords a couple with a societal stamp of approval which is sadly pretty important in many regards.  People can relate to and understand marriage.  People in general, like all animals, are simplistic beings that are best able to understand the world in black and white terms so to them marriage is good and what one is supposed to do.  Not being married is contrary to their view of the world.

In other parts of the world, arranged marriages are still common.  In India and China, for example, marriages arranged by parents is normal.  This too is ridiculous to me but is a result of the extremely conservative culture of the countries.  With my Western point of view, seeing individuals get married to people chosen by others is weird and sad.

Sadly, marriage is such a deeply ingrained institution in the minds of most people in the US. Because of its major integration into society, it is very difficult to escape either the actual institution or the perceptions of it in the typical persons’ mind.  But when viewed apart from societal norms and perceptions, when viewed “outside the box” (*vomit*), the institution of marriage confuses the hell out of me.  When two people love each other so much that they want to spend the rest of their lives together, instead of feeling confident enough in their love to get them through life, a contract is signed so lawyers and the government can enter into their love affair.  Maybe Cupid should be shooting contracts and pens instead of arrows at couples.