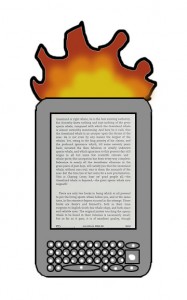 Ereaders are awesome! I’m tired of people talking about paper books with nostalgia. I can’t stand when they talk about the texture of the cover or turning the musty smelling pages. They can’t seem to get off of reminiscing about walking through aisle after aisle of books in some old library waiting for the next book to jump out at them. “Oh god,” they say, “don’t take away one of the final remaining forms of entertainment that doesn’t require electricity. The kids today are becoming less and less literate and only know how to talk in acronyms and then again only in 180 characters.” What unevolved dolts these people are!!

The thing none of these dinosaurs ever mention is that the information contained within a paper book is exactly the same as an eBook. It’s this information that is the sole reason for the existence of books in the first place. As with so many things the means to accomplishing an ultimate end has changed but not the end itself. Humankind forever progresses.

Paper books may hold a certain nostalgia due to the living nature of books themselves, their paper being made from once living trees decaying along with the people reading them. They also, in one form or another have existed for over 2000 years, first as scrolls and then the now familiar bound book. There’s definitely a mystical aura surrounding them with their history.

However, eBooks offer so much more than paper books ever could.  For one thing, eBooks don’t exist in any tangible form outside of 1’s & 0’s. Because of not physically existing, they can exist everywhere all at once. No more being limited in your reading choices by what is physically beside you. Any one anywhere can obtain any book ever written now (assuming that it has been digitized at least once). No more throwing out your back by having to lug around boxes filled with out of date bricks. All one needs now is a memory stick, an eReader, a laptop, or nothing at all if your book is in the cloud. Your whole book collection can now be virtually as mobile as you.

For academic purposes, eBooks allow quick reference with their ability to quickly do a find for any word or sentence in their text. They also allow people to easily take notes by allowing their readers to highlight sections of relevant text which then can be easily accessed all at once. If you want to quote a section, all you have to do is copy and paste it into your own writings. Don’t know a word? Look it up instantaneously in the built-in dictionary. Environmentalist? EBooks don’t use any paper created from chopped down trees.

Don’t get me wrong though, there are problems with eBooks. For one thing, they do have to be recharged. I mean their batteries only last for about a month with constant use. Secondly, you can’t display them triumphantly on book shelves in your home proudly showing all of your guests just how smart you are with how many books you’ve read or more likely – just bought and are “going to read”. Thirdly, if you read eBooks you can’t say such things as, “but there is something about actually holding a book and feeling the pages,” plainly letting everyone know that you’re a romantic and an avid reader and intellectual. And more pretentiously “What is the world coming to today? Kids won’t even know what a book is in the next ten years.”

Yeah… I mean all that kids have today is access to any information in any form they want at any given moment. Granted most reading on the internet isn’t exactly Tolstoy, but neither are most paper magazines or books people read. I truly don’t think there’s anything to worry about. For all those that think that the slow demise of paper based books is the demise of books in general – grow up and pull your head out of your ass. There are more books being published in one week than in an entire year just fifty years ago. This is not to say anything about quality but such stats show that books are far from dying out.

In the end, the eBook detractor is nothing more than a recycled character that continually reappears throughout time whenever advancements have been made. They would have been the same person who would have been fine sticking with their horse and buggy not accepting the automobile as the new form of transportation. They would have romanced about the clickety clack of the horse shoes hitting the ground, the smell of the horses and their shit littering the streets, and about their personal relationships with their horses.

People don’t like change, but it’s just a matter of time really before the things these people reject become the things that some in the next generations won’t want to let go.  Now with people trying to evolve once more, switching to a pure source of information existing more as an idea than a thing, the descendants of the horse and buggy supporters have found their new thing to reminisce about until the new generation replaces them.