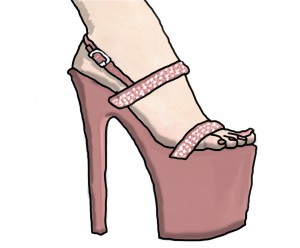 I will never understand something that makes the wearer look clownish as they try not to fall over because they are walking on mini stilts.  The fact that high heals are “shoes,” a category of fashion whose primary reason for existence is to protect peoples’ feet and facilitate walking, makes high heels even more baffling.

Now, some may say that high heels were never meant for walking but instead to make the wearer look more feminine – the arched heel helping to firm up and highlight the legs and butt.  Because of this association with femininity as well as providing the wearer with a significant increase in height, they are often associated with sophistication and power as in the workplace as well as less desirably – prostitution.

High heels to me are comparable – albeit to a much lesser extent – to the relatively recently banned Chinese cultural custom of foot binding where the feet of women would be wrapped backwards making the women’s feet appear significantly smaller.  This custom would actually break the bones in the feet and leave the feet permanently damaged for the rest of the women’s lives.  As with arguably most cultures across time, the “small” feet were viewed as more feminine than larger more “masculine” feet.

Though much tamer than the old Chinese practice, high heels still hurt women’s feet and rely on long standing societal views of feminine beauty.  High heels place the feet in an unnatural position, don’t provide the support needed for walking and can be hazardous on uneven surfaces.

Ultimately, I just can’t wrap my head around high heels because they’re completely impractical and look absurd.  Given their lack of practicality, it’s astonishing that many designer pairs cost several hundred dollars. This is a long way from their practical origins in ancient Egypt where they were worn by butchers to avoid getting blood on their feet as well as leaders during ceremonies.  Now, they are used to create an illusion of femininity by disabling the wearer’s mobility and reinforcing women’s place as objects.