Burqas & Niqabs – the Jawas among us 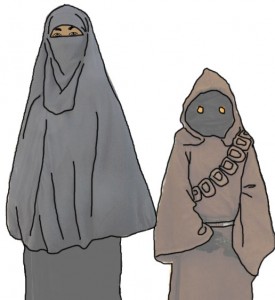 I don’t get it. Women who spend their entire public lives looking like Jawas. This is something that goes far beyond my understanding of other cultural differences. Burqas and Niqabs occupy an entirely different spot. For all I know there aren’t even people underneath but rather aliens. Those who don the black robes are that bizarre to me. The only proof that I have that they aren’t actually aliens is the ever so tiny amount of skin exposed around their eye slit or holes.

My favorite part about them is that they are a somewhat indirect result of one person’s musings 1500 years ago. In the Quran, there are a handful of passages that talk about how a woman should maintain modesty in appearance. However, as with all centuries old religious passages with gods who liked to write cryptically, they are open for interpretation. The following is a passage instructing women to guard their modesty:

Passages like the one above have created ever important and meaningful debates within the Islamic community as to what degree a woman should cover herself. The more liberal interpretation is that a woman should dress moderately and wear a hijab whereas the conservative view is that they should be completely covered.

Culturally, as well the modern Arab world is male dominated.  These garments reinforce that by not allowing women even a chance to have any real life outside the home.  Because of women having a such a diminished role in society, the male ego is not threatened.

One direct example I saw was, sitting in a McDonald’s in Aquaba, Jordan I sat eating my Big Mac.  The thing tasted the god damn same as at any McDonald’s in the US.  At the table beside me was a family of four. The scene in most regards really could’ve been one seen anywhere. Two little boys sitting eating their happy meals – fidgeting a little bit, the father across the table eating his Big Mac, and beside him his wife eating her hamburger with a Ronald statue in the background. Everything was all very normal, except the woman was covered in a full niqab while eating her food. It was the strangest thing. In order to protect her modesty while out in public with her husband and two little boys, eating at a restaurant that could be considered the epitome of liberal capitalist society, she still had her face and everything else covered!!! In order to eat her hamburger, she picked it up with her black gloved hands, leaning her body forward slightly to create a slight gap between her face and veil, and lifted the burger up behind the veil to her mouth.

The irony here is that the woman, despite being completely covered except for her eyes, appeared to be around 50 years old, the same age as her husband, and looked like she’d enjoyed one too many McDonald’s meals being obviously overweight with her niqab shaped like a big black balloon. I really don’t think there was any risk of her modesty being at risk from wandering eyes. Hell, she probably was doing everyone a service. Maybe we could even learn from her. Imagine going to a local grease joint in the Southern US and all of the obese people in there had the same courtesy. Still, the very fact that she sat there completely covered while the rest of her family were comfortable in pants and shirts is beyond me. The image will never leave my mind as to – at least in my mind – how poorly women can be treated in some places around the world.

Some may argue (even the burqa & niqab clad women themselves), that I don’t understand because of my Western upbringing and that women actually do like being covered up. I don’t care. The fact that it is now the 21st century, people have walked and even driven cars on the moon, have robots exploring Mars, mapped the human genome, have access to infinite amounts of knowledge on the internet and people are still abiding by an outrageously outdated book which subjects whole swaths of the population to barbaric customs is beyond me. If men have such a hard time not to just grab a woman because she’s not completely covered up that’s on them. Unless it’s Halloween or the new Star Wars movies includes giant black Jawas, there is no reason for the burqa or niqab.