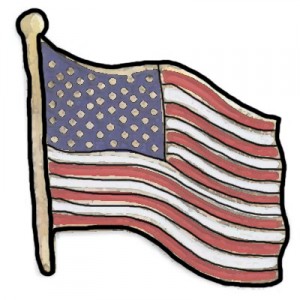 Not wearing a lapel pin is viewed by many as un-American and pure blasphemy since patriotism somehow has become intertwined with religious fervor. Look at what happened to Barrack Obama during the 2008 primaries. People questioned his patriotism and commitment to the country for not wearing a lapel pin. He explained that he saw “people wearing a lapel pin but not acting very patriotic.” So “I decided I won’t wear that pin on my chest. Instead I’m going to try to tell the American people what I believe… and hopefully that will be a testimony to my patriotism.” Eventually, his style choice was blown so out of proportion that the statement he was trying to make wasn’t worth the backlash. He now wears one.

It’s a sad commentary when a clothing accessory gets elevated to a point where it’s almost more important than a person’s actions. It takes all of a couple of seconds to place a metal pin on your lapel but it takes true character and time to do actions that actually benefit the country. What’s the next trend?  Politicians wearing full on Uncle Sam outfits? Do all politicians have to become one of those crazy people who wear shirts or hats covered in a multitude of pins, each one representing a different cause?

It’s sort of akin to Christianity and the cross. I’ve met a good number of people who had questionable work and moral ethic but who would always wear either a cross or have one in their car hanging from their rear view mirror. All that the cross and the flag are are symbols.

“A goose is still a goose whether covered
in swan feathers or not.”